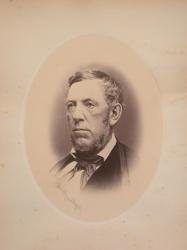 Shepard Cary (1805-1866) was one of the most influential leaders of early Aroostook County. While his success can be attributed in part to the good fortune of being in the right place at the right time, his ability, energy, and courage also contributed to his many achievements.

Cary, a native of New Salem, Massachusetts, was 17 when he and his family moved to the New Salem Academy Grant, now Houlton. After helping to construct the family home, Cary spent several years in New Brunswick working as a carpenter. He returned to Houlton Plantation in 1826 and opened a small store in his father's house.

In 1832, Cary began a business partnership with Collins Whitaker, also from New Salem, Massachusetts, who became his brother-in-law. Together they operated one of Aroostook's most successful and influential businesses under the name of "Shepard Cary and Company."

Cary was involved in nearly every event of importance in the first decades of "The County." He also amassed a personal fortune in the process.

Good fortune smiled on Cary when, in 1828, the U.S. Army built the Hancock Barracks just up the hill from his store. Cary and his father were involved in the construction of the fort and Cary became one of its principle suppliers. He also became sutler to the barracks in 1837, a position he held until 1841.

In 1832, Cary went back to New Salem to woo Susannah Whittaker, the sister of his bookkeeper, Collins Whittaker. Her parents viewed Cary as a ne'er do well. They reportedly locked Susanna in the attic of the house, from which she escaped after five days. Shepard and Susannah Cary were married December 25, 1832.

Also in 1832, at age 27, Cary was elected to the first of 13 terms in the Maine Legislature. He was considered a leader in the Maine Democratic Party and his influence in Augusta was considerable. His obituary stated that "much of the legislation of the State bore the impress of the strong, practical good sense which distinguished him."

There was big money to be made cutting the virgin pine timber of Aroostook, and Cary was not a man to miss an opportunity. He was harvesting timber on the Aroostook River in the winter of 1838-39 along with numerous New Brunswickers. During the 1839 spring log drive, Cary's timbers were denied passage at the Aroostook Boom in Fort Fairfield by Maine Militia Captain William Parrot, an action taken as part of the border dispute between Maine and New Brunswick. Cary quickly ordered his timbers to be taken downriver despite Parrot's order.

Plan of the British and American positions, Aroostook War, 1843

Despite Cary's efforts he suffered a considerable loss and tempered his views of the border dispute. Cary and others were ultimately willing to compromise and allow the British their military and communication road to the St Lawrence via the St John and Madawaska Rivers and Temiscouata Lake. In return, in addition to monetary compensation, Americans received a guarantee of free navigation of the St John River.

Cary and the other leading figures in Houlton fully understood the importance of river navigation as they had received and sold most of their goods via the St. John since their first arrival in this tract of wilderness over 100 miles north of Bangor.

In 1840 he began to build a group of mills in an area of Houlton henceforth known as Cary's Mills. He built a grist mill, sawmill, clapboard mill, machine shop, and a furniture shop. All of his mills and shops featured the best available machinery. 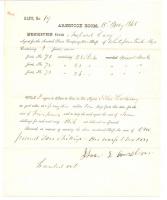 Cary quickly expanded his area of operation to include all five of the major river systems of Aroostook County. He was joined in his harvesting operations by his brother, William Holman Cary Jr. They explored widely and purchased timber harvesting rights from both Maine and Massachusetts, which retained title to half of all the unappropriated lands of Aroostook.

Cary purchased and hauled many of his own supplies to the upper St John. He also ran a large farm at Seven Islands where he grew much food, hay and grain for his camps and those of others. Here he also summered many of the horses used during the winter harvests. Cary was used to operating in isolated areas and was quick to take advantage of the newly defined border and the guarantee of free passage to and from markets via the St. John River.

As Cary became increasingly wealthy he also purchased large tracts of land, including two full townships of land along the Allagash River. One "stick" was reportedly 6 feet square by 40 feet long and took 10 of the strongest horses to move. Sticks were rough squared by broad ax in the woods to make transport by raft easier.

To cut and drive these timbers to market required many workers. Cary employed as many as 2,000 men at the peak of his harvesting operations. Many of the surnames of Aroostook County had their local origin with men who had come from New Brunswick to work for S. Cary and Co.

During the 1840s Cary remained active in the Maine Legislature. He was elected to the U. S. House of Representatives in 1843. He was a leader of the Maine Democratic Party most of his life. In 1854 he ran for governor on an "opposition Democrat" ticket but returned to the fold in 1855. His last election to the Legislature in 1862 was on the "Union" ticket, representing a coalition of Republicans and loyal Democrats. 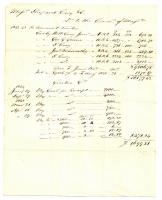 Rumored to be an atheist, Cary was asked by a political opponent what his religion was. Cary reportedly knew of his opponent's reputation for "short measure" and replied "My religion, brother, is half the road and four pecks to a bushel." 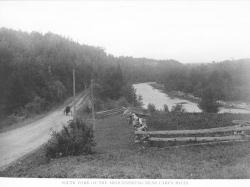 After 1850 he increasingly distanced himself from the timber operations and left that portion of the business to his brother Holman, who became associated with William Cunliffe, another legendary Aroostook lumberman. This freed Cary to devote more time to politics and his Houlton business ventures.

In about 1852, he built a foundry and machine shop at Cary's Mills. He introduced the first mowing machine on his nearby sand hill farm and built a large brick building on Court Street, which still stands. His early recognition of the importance of the railroad and lobbying to bring it to Houlton led to a new era of prosperity. He continued to exert a considerable influence on a local, county, and state level until his death in 1866.

Shepard Cary's obituary in the Aroostook Times sums up his life by stating,"Shep Cary's name was a household word throughout the County." The Cary name lives on in Cary's Mills, Cary Street, Cary Plantation, Cary Lake, the Cary Medical Center, and Cary Library. 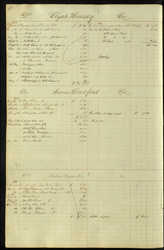 On the page at left, the first account is that of Elijah Hersey who came from St John, New Brunswick, to Linneus in 1832. His grandson, Ira G. Hersey, became a prominent Houlton attorney, Maine Legislator and Senate President, and served six terms in the U.S. House of Representatives.

The second account is that of James Crawford, a native of Warren. James and Jane Jameson of Richmond, New Brunswick, were married by Squire Samuel Cook on December 31, 1833 at Houlton. After the birth of four children between 1834 and 1840, James removed to Little Rock, leaving his young family behind and his balance of $42.20 due to S Cary and Co unpaid.

The third account is that of Paris, Maine, native Joshua Carpenter, colonel of the First Regiment Maine Militia. He came to Aroostook in response to the boundary dispute. He was high sheriff of Penobscot County and Indian agent to the Potawatomies in what is now Kansas. He was killed by the felling of a tree in 1866 at Cary, Maine. 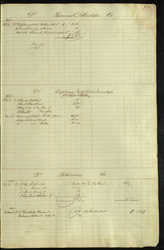 View transcription of page at left

On the page at right, the first account is that of Thomas Obdur Shields, a native of Jacksontown, New Brunswick, who married in nearby Linneus in 1847 and died there in 1902.

The second account is "Exploring Fish River Townships of Doyle and Gelkey." This is illustrative of the Cary Company's many explorations of the virgin timber available to Maine loggers following the settlement of the boundary dispute by the Webster Ashburton Treaty of the previous year.

The third account is that of Lt. Bowens, an officer at Hancock Barracks. Cary operated a store near the barracks and was appointed sutler there from 1837 until 1841.

View transcription of page at right