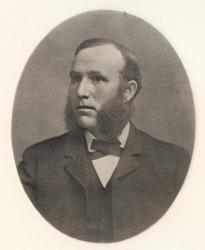 John Parris Sheahan was a faithful correspondent to his family in Dennysville from the time he joined Co. K of the 1st Maine Cavalry in August 1862 until he was mustered out in July 1865. He wrote about politics, the war, the officers in his regiments, the death his brother, who was also a soldier; his concerns about his younger brothers enlisting, and falling in love.

Sheahan's letters, which he urged his father to save, and which were passed down to his son, offer a remarkable glimpse into an articulate and thoughtful soldier, who was concerned about his own future and that of the nation.

A son of John and Eleanor Sheahan of Dennysville, John Parris Sheahan was born Sept. 28, 1842. He was 21 when he enlisted in the cavalry. Like many soldiers, he initially was excited and enthusiastic, both about the cavalry regiment and about the war.

Before long, however, Sheahan's letters home reflected a new attitude. He began to worry, after numerous Army of the Potomac defeats, that the enthusiastic Rebels would prevail. In March 1863, he wrote, "The south are determined to have their Independence and they will have it and no soldier in the Army of the Potomac doubts but they will get it." 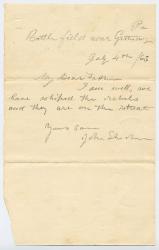 Letter from John Sheahan to his father, 1863

He continued, suggesting that the argument that the Confederacy did not have enough money and supplies to win was not convincing. After all, Sheahan wrote, the same thing was said about American Patriots during the Revolution.

In January 1864, he wrote, "How little did any of us then think that it would grow into a gigantic war filling our country with men maimed for life," referring to the men and boys who answered the first call for soldiers in 1861. He added, "The spring campaign will commence the fourth year of the most bloody war the world has ever seen. I hope it may put an end to the Rebellion but oh I fear not."

Like other soldiers, he sometimes wrote about the humanity of the Confederate soldiers and described friendly interactions when soldiers from opposite sides encountered one another on picket or other non combat occasions.

Sheahan bristled at the treatment of privates -- which he was -- and also of conscripts, who he said were treated like dogs. He thought his own captain was being unfair to him. Sheahan had been praised by other officers for his bravery and coolness under fire. Several officers suggested he should -- and would -- be promoted. But when promotion did not come, Sheahan appealed to his father back in Maine to do what he could to get the young soldier a commission, even if it cost him several hundred dollars.

In part, Sheahan wanted a commission so he could earn higher pay. He wanted to study to be a doctor -- and he wanted to get married. 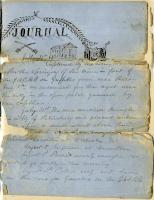 John P. Sheahan's life changed in November 1863 when his brother Sgt. William Sheahan was killed at Rappahannock Station. William, who was about 27, had enlisted on July 15, 1861 in Co. F of the 6th Maine Infantry Regiment. Several times, the brothers had managed to visit one another when their regiments were encamped in the same area.

Several months later, he wrote to his parents of his continued sorrow at William's death. "He died a most brave and gallant soldier," Sheahan wrote.

At about the time of William's death, John Sheahan began a serious study of infantry tactics and other subjects, part of his effort to pass an exam and get a commission. In March 1864, he got his wish. He was discharged from the 1st Maine Cavalry and commissioned as a 1st lieutenant in Co. E of the 31st Maine Infantry.

At some point while camped in Western Maryland, Sheahan met Lizzie (Mary Elizabeth) Shriver. He wrote home about her and, in February 1864 told his parents he was engaged, but that they would not marry until four years after the war ended and he had finished school. 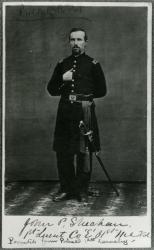 In July 1864, he was taken prisoner at the Battle of the Crater and served some seven months in various Confederate prisons before escaping in early 1865.

Sheahan was mustered out on July 15, 1865 and he and Lizzie Shriver married on August 16, 1865, in Carroll County, Maryland. Sheahan enrolled at Maine Medical College at Bowdoin, graduating in 1867, with degrees as a physician and a dentist.

Sheahan also had an interest in geology, which he persued while he and Lizzie lived in Canada for a brief time. They also went back to Maryland and he earned an A.M. from Western Maryland College in 1874.

By 1880, the couple were living in Washington County, near where Sheahan had grown up. He practiced medicine and dentistry there, continued his interest in geology, and developed an interest in photography. They had two sons, John and William H., who was named for the brother killed in the war.

John Sheahan died in 1894. In 1940, his son William, then living in Pennsylvania, donated his father's letters to Maine Historical Society. Sheahan wrote of the letters that they were "all in dated envelopes just as my father arranged them before his death. I have read them all over before sending them, there are heart aches in many of them."