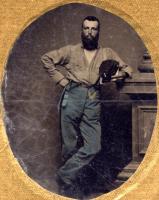 Like many soldiers, Grenville F. Sparrow defined his life in part through his service in the Civil War. Sparrow kept many of the items he wore and collected during the war and passed them down through his family.

He brought back from the war clothing, including long underwear, an officer's coat, belt, and other items of uniform; Confederate currency, buttons, and cartridges; photographs and certificates; a U.S.-issued cartridge box and battlefield shells; a piece of hardtack, and his mess kit.

Sparrow (1836-1907) was 25 when he enlisted in Co. A of the 17th Maine Infantry on August 18, 1862. The 17th Maine – known as the Red Diamond Regiment – like a number of Maine regiments was organized after President Lincoln's call for three-year soldiers in 1862. More soldiers were needed, according to Maj. Gen. George McClellan, whose leadership had failed to bring victories in the Peninsula Campaign.

Sparrow served until the regiment was mustered out June 4, 1865 in Washington, D.C. A sergeant when he enlisted, Sparrow was promoted to 2nd lieutenant in June 1863, then to 1st lieutenant of Co. B in December 1863, and, in 1864, to captain.

The 17th Maine was involved in 30 campaigns – as its regimental medal notes, "From Fredericksburg to Appomattox."

His obituary notes that he "never got a scratch of any kind in the shape of a wound or sickness."

Besides saving artifacts and photographs from the war, Sparrow was active after the war in veterans activities such as 17th Regiment reunions and the Bosworth Post of the Grand Army of the Republic in Portland.

After the war, Sparrow, whose first name appears in records both as "Grenville" and "Granville," worked as a clerk, retail merchant, and salesman, mostly in Portland. He married Martha Tukey in Portland in 1867. They had one daughter, Ethel.

Sparrow also tried inventing. In 1876, Sparrow and a partner, Stillman Houghton of Worcester, Massachusetts, received a patent for improved cuff buttons. Houghton (1820-1889), had moved to Worcester to work with the Worcester Skirt Company that made skirts and corsets. Sparrow's travels as a salesman may have introduced him to Houghton. It is unknown what became of their cuff buttons.