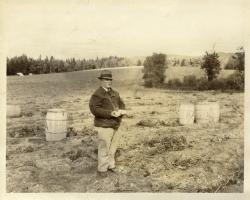 Most Jewish immigrants who arrived in America in the late 19th and early 20th centuries would never have considered coming to Maine. After all, the entire population of Maine in 1900 was not even 700,000, with only a couple thousand Jews. In the same year New York City could boast a population of 600,000 Jews.

The move to Maine, with the exception of Portland and Bangor, meant settling in a small and unstable Jewish community, or in a place without one at all.

Most Jewish immigrants looked to their occupations to cement for themselves a place in the Pine Tree State. Maine offered opportunities for employment and also the chance to improve one's quality of life, as the state offered a different lifestyle than the bustling urban centers that housed hundreds of thousands of Jews.

Through a discernible pattern of contributing, advancing and succeeding, those who stayed in Maine established themselves through their occupations and with an eye toward the future.

Over the past two hundred years life in Maine for Jews has been defined by, in addition to religious and communal experiences, their occupations. From industrious peddlers to successful farmers, professionals and businessmen, Jews in Maine have made their mark on life in Maine.

A member of the Class of 2012 at Colby College, Spencer Kasko is from Mechanicsville, Maryland.

Return to The Jews of Maine