Evergreens and a Jolly Old Elf 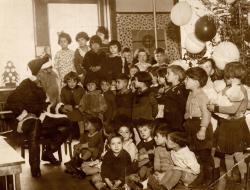 Evergreens and a Jolly Old Elf

Diary entries and letters dated December 25 and written before the last decades of the nineteenth century rarely mention "Christmas," even when written by church-going Christians. The holiday as celebrated by Christians in America today has ancient roots but a fairly recent origin.

Ancient peoples observed the winter solstice, the shortest day of the year and the beginning of the return of the light. Jews, more than 2,000 years ago began observing Hanukkah, the "Festival of Lights."

The Romans had Saturnalia -- in honor of Saturn, the Harvest god -- a seven-day observance that began December 17 and included evergreens as part of the ritual. Germans, too, used evergreens in winter, to symbolize immortality. Scandinavians adapted Roman symbols into the wreath. A generous Turkish-born priest, "sainted" by popular acclaim, was the inspiration for St. Nicholas, whose special day was December 6. The Dutch called him Sinter Claas.

All of these rituals and observances occurred at about the time of the solstice and have some similarities.

In America, the traditions came together as part of "Christmas" in the middle of the nineteenth century. Several New Yorkers, especially, sought to tame the unruliness that accompanied continuing mid-winter celebrations. The poem "The Night Before Christmas," Washington Irving stories, and Thomas Nast cartoons cemented the notion of the jolly man who gave presents. The evergreen -- especially trees and wreaths -- joined Santa and a tradition was born.

The two images remain prominent in America, regardless of religious connection.