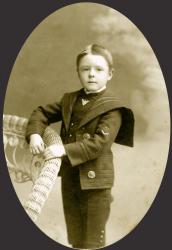 When the daguerreotype process arrived in Maine in 1840, it provided a relatively inexpensive alternative to painted portraits, which were out of the financial reach of most Maine people. As the 19th century progressed, and photographic processes became faster, cheaper, and increasingly widespread, children remained popular subjects.

Because infant mortality rates were shockingly high in the mid 19th century (22-34 percent of babies born in the U.S. did not survive infancy), post-mortem photography was a common practice. Often the only image of a child was one taken after the child's death.

Photographers capitalized on parents' fears. One daguerreotypist advertised, "Those parents who desire Pictures of their little one . . . when they remember the uncertainly of life, and the suddenness with which the graceful bud is often plucked . . . will do well to call on the original Daguerreotype Gallery." (Robinson, A Certain Slant of Light)

By 1900 the U.S. infant mortality rate fell to 11-17 percent and parents' motivations for photographing children changed. By the 1870s, children, often posed in elaborate costumes and placed in luxurious settings, were portrayed as decorative objects, and reflected their parents' ability to provide and care for their family. These romantic representations of children are indicators of a secure and economically stable domestic sphere.

Studio photography was widely available in both rural and urban Maine in the mid 19th and early 20th centuries. Parents often had their sons and daughters professionally photographed throughout the duration of their childhoods. As the children grew, the clothes they wore and the props they posed with were indicators of the child's age and interests, as well as the status of the family.