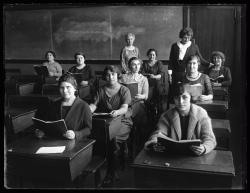 Twenty Nationalities, But All Americans

From 1922 to 1945, the Portland Public Schools offered daytime "Americanization" classes for adult and school-aged immigrants. Although organizations in Portland had provided coursework in the English language and citizenship before, this effort, led by veteran teacher Clara L. Soule, was the most visible and vigorous.

Americanization was a national movement that gained traction during World War I, when some Americans questioned the loyalty of immigrants to their adopted land.

The 1924 National Origins Act, which restricted European immigration and prohibited Asian immigration, was the result of several decades of debate over the place of race and ethnicity in American citizenship. On a local level, changes in Portland city government and the rise of the Ku Klux Klan were motivated by anti-immigrant sentiments.

In response to the charge that immigrants could never become American, leaders like Clara Soule used public education to demonstrate that American democracy was, indeed, inclusive.

Rachel Miller is the education assistant at Maine Historical Society and a student in the University of Southern Maine's New England and American Studies graduate program.