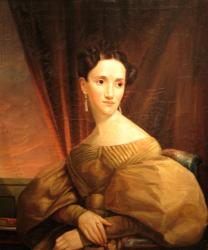 Portland's growth began in 1786 when citizens changed the name of the town from Falmouth Neck.

Between then and the middle of the nineteenth century, the footprint of the city as it exists today was established, a maritime economy flourished, and the population increased dramatically.

Part I: The Early Years

By the early nineteenth century, products made by native born and locally trained artists replaced those of itinerants and the work of these Portland artisans found their way into private home and influenced the efforts of students, teachers, and performers in city schools, theaters, and academies.

The demand for the arts helped native born and locally trained decorative painters, gilders, silversmiths, potters, furniture and cabinetmakers, tinsmiths, and other artisans thrive in Portland in the early nineteenth century.

Fashionable costumes and stately poses rendered with care and emphasis provide a visual sense of the personal style and stature of the period.

Finely crafted furniture made with exotic or colorful materials illustrate changes over time in taste, design, and craftsmanship.

These works represent the distinctive nature of the arts and artisans of Portland.

This two-part online exhibit is based on an exhibit featured from June to December 2005 at the Maine Historical Society Museum. The exhibit was sponsored by Noyes & Chapman Insurance, Maine Employers Mutual Insurance Co. and the Phineas W. Sprague Memorial Foundation.

Click on the links below the images to view Part I: Early Years; and Part II: Arts Flourish in Portland.