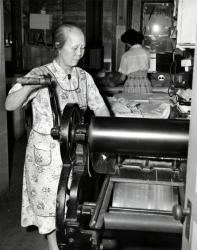 While the west coast was home to most Chinese immigrants in the United States, Maine also attracted Chinese immigrants. Maine's early Chinese community peaked at 161 in 1920. By the end of WWII technological and social changes led to the decline of Chinese hand laundries causing many Chinese to leave Maine for larger cities.

Immigration laws that had barred Chinese since 1882 changed in the 1960s and the number of Chinese coming to Maine grew quickly. Maine's current Chinese community is significantly different from the early community -- more urban and well-educated and originating from all over China, not just from southeast China as before.

The images here suggest the ways in which a minority population lived and coped in a state that was not known for ethnic diversity.

The original version of this exhibit was on display in the Showcase Gallery at the Maine Historical Society from April 11 to August 31, 2003. It was funded, in part, by a grant from the University of Maine System.