Stories and tall tales regale the exploits of Maine river drivers and lumbermen, but equal in legend are the cooks and their assistants, the cookees, who fed the men. As Robert E. Pike wrote in Tall Trees, Tough Men (1967), woodsmen would not work unless they were fed, and fed well, facts that gave the cook considerable power.

For instance, cooks could – and did – demand silence at meals, a rule intended to speed the eating process and allow the cook and cookees to clean and wash dishes. Cooks might cold food when they thought the men had eaten enough. They might threaten to walk off the job if the boss demanded something or was disagreeable. A camp with no cook, or one with a bad cook, would not survive. 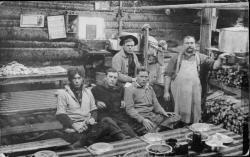 A cook's reputation spread quickly through lumber camps and workers were said to weigh the quality of cook equally with the pay offered when deciding where to work.

Menus and food choices were limited in the woods. As various historians and memoir writers have noted, most cooks could prepare meat. The choices were limited: salted meats, salted or canned fish, and, depending on location, some frozen beef – as long as it was eaten before it spoiled due to lack of refrigeration.

Pork and beans, molasses, gingerbread, and tea boiled in a pot were staples. Cooks might excel – and draw a following – with their breads, pastries, pies, and baked beans. As Richard Judd wrote Aroostook: A Century of Logging in Northern Maine (1989), "The art of camp cooking … hinged on the knack of preparing one thing in a number of different ways." 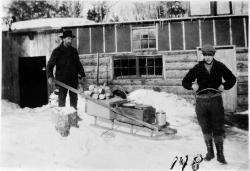 Cookees assisted, learning the trade, along with washing dishes, building fires and delivering meals when lumbermen were too far from camp to return at noon. The delivery process involved a one-runner sled loaded with food or a pole the cookee carried across his shoulders, with buckets of food hanging off each end. The cookee then walked to the work site where he built a fire to warm the food and serve it to waiting loggers.

He called it the "absolute domain of the cook" with no one allowed in outside of mealtime, unless invited. 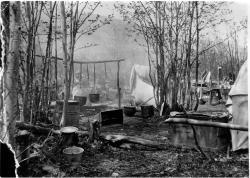 The loggers had self-selected places at the table and once chosen, the places were permanent. New men had to wait until others were seated to find an available space.

Rumors about cooks stirring beans with cant dogs (a stick with a hook on the end), using soap to make biscuits rise and flipping huge flapjacks from the griddle into the air to turn them over all contribute to the lore of the camp cook.

But all power did not rest with the cook. If the loggers were unhappy with the food, they talked during meals and carried out other disruptions to force the boss to fire the cook.

Crew with Sylvesters, near Ashland, 1900