Maine Memory Network
> May Baskets, a Dog, and a Party for Children

May Baskets, a Dog, and a Party for Children 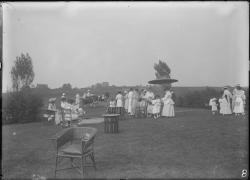 Summer residents of the Pool and others held many parties that summer to raise money for aspects of the World War I effort. The U.S. had entered the war on April 6, 1917, prompting civilian efforts at assistance.

But 1917 Biddeford newspapers carry no reference to this party at the "Foster" residence, although there were plenty of stories about other war relief parties.

The party at the "attractive summer home of Mrs. T. K. Niedringhaus of St. Louis" for 22 children followed one some weeks earlier given by Mrs. Foster, "another summer resident at the Pool."

Ladies surround child on small slide at a children's party at Biddeford Pool, 1917

The parties were given to make reparation to the children for a "rather humorous incident" that occurred the previous May.

Mrs. Niedringhaus was spending the night at Mrs. Fanny C. Foster's home on Main Street. They heard a knock at the door and, "fearing burglars, the house dog was loosed and he chased whoever the party was across the golf links and far away."

The next day, the women discovered two May Baskets hung on the door by children. As an apology for the chase, each woman held a party for the children.

The article concludes, "There are those among the children who aver that they would gladly be chased across the golf links again for another such good time."

Renée DesRoberts is the archivist and adult room librarian at McArthur Public Library in Biddeford.