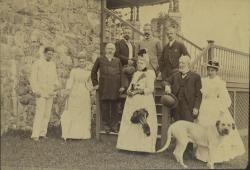 On a summer day in 1889, James G. Blaine, former member and speaker of the U.S. House of Representatives and current Secretary of State, posed on the steps of his summer residence in Bar Harbor with his wife and children, and guests President Benjamin Harrison and U.S. Rep. Henry Cabot Lodge of Massachusetts. 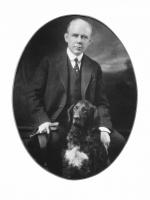 The party are dressed fashionably, the women in hats and parasols, the men in suits, holding their hats. A professional photographer, S. Towle of Lowell, Massachusetts, took the photo and probably posed the group for greatest effect.

In front is a dog, not as carefully posed, but looking at the camera.

People and animals have a long history together and pets – the companion variety – were well entrenched by the early nineteenth century. People's fondness for pets was apparent even before the days of photography when those who were wealthy enough to hire artists sometimes included their pets in painted portraits.

Daguerreotypes, which became available in Maine in 1840, and subsequent photographic processes democratized all that and images of pets – with or without people – proliferated.

By the end of the nineteenth century, people in Maine and elsewhere could buy books about pets and pet care, prepared food and health items for pets as well as numerous other products, all of which suggests that dogs, cats, birds and some other creatures mattered to Americans.

Historical collections include many images of people and pets. As one might expect, a number of them are pictures of children or family groups. Some are snapshots. Others are formal portraits, taken in photographer's studios or at outdoor settings. 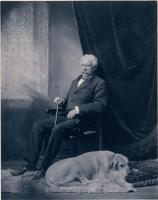 One category of these more formal images is notable people and their dogs.

Most Mainers would not be surprised to find a studio portrait in an oval format of Maine Governor Percival P. Baxter and his Irish setter Garryowen. Baxter, who donated the land for Baxter State Park, was a legendary animal lover whose Irish setters were his constant companions and are buried on Mackworth Island where Baxter lived.

Other portraits – all from the nineteenth century – might be more surprising. Lillian Norton, a Farmington native, was a soprano who performed as Lillian Nordica. She and her standard poodle, Turk, posed for a photographer in Berlin in 1894. Turk is on a table next to the singer, who has one hand behind him and the other holding his paw. The dog traveled throughout Europe and the U.S. with her as she performed.

Henry Wadsworth Longfellow posed in about 1864 with his dog, Trap, who sat on a table beside the poet. Of the dog, Longfellow wrote, "The last and greatest of all the dogs was Trap; Trap the Scotch Terrier, Trap the polite, the elegant, sometimes on account of his deportment called Turneydrop, sometimes Louis the Fourteenth."

Peace activist Sarah Jane Farmer of Eliot in 1891 had painter Frank Hector Tompkins portray her in her garden, seated in a chair, her arm on the back of her dog, Barry. 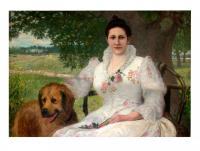 Several Maine Memory images show Samuel Anderson, a Portland lawyer and longtime president of the Portland and Ogdensburg Railroad, and his dog. In one studio portrait made in 1888, Anderson is seated in a chair in front of a heavy, dark curtain, his walking stick in his hand and his dog, Nellie, lying on a rug at his feet. The portrait has a wistful quality. In most of the dog-human portraits, the dog is seated or standing and posed to be at about the same level as the human's upper torso.

The portraits of noted Mainers and their dogs are interesting because of their formality. The people are wearing their "dress-up" clothes and the scenes, as well as the animals, are pristine. More casual snapshots are more expected, perhaps. Together, though, they support the claim that pets have long been firmly integrated into Maine lives.