On January 15, 1901, Lewiston received a $60,000 grant from the Carnegie Corp. of New York for a new public library. It was the largest amount Carnegie gave in Maine, and the first for an entire project.

The structure, designed by Coombs and Gibbs, had granite from North Jay and Norridgewock, a Greek-inspired vestibule, and fine oak woodwork. The entrance was on Park Street.

The library was renovated in 1996 and the entrance moved to Lisbon Street, but elements of the original building remain.

Earlier, in December 1897, Gardiner received a $2,500 Carnegie grant to complete a building project that had begun in 1881. It was the smallest amount of money the philanthropist awarded in Maine. Because the project began before Carnegie's money arrived, not everyone considers the library a "Carnegie."

In all, 20 facilities in Maine received funding from the noted industrialist between 1897 and 1912.

Andrew Carnegie's life story is well known. Industrialization in his native Scotland led to the demise of both his father's trade and his own formal education. The family came to America and young Andrew worked in a textile mill, then other ventures before gaining success in railroads and steel.

Carnegie credits his rise from mill worker to industrialist in part to the availability of a library. He believed in sharing his fortune in ways that would enable others to educate themselves, and to rise to higher socio-economic levels.

Writing about philanthropy, Carnegie stated that men of fortune should set an example by living moderately and by using their "superior wisdom, experience, and ability" to distribute their surplus funds. He wrote, "In bestowing charity, the main consideration should be to help those who will help themselves."

Therefore, between 1896 and 1919, Carnegie gave more than $39 million to communities – mostly small ones where cultural resources might be limited – to build libraries.

The money came with stipulations: the town must own the land where the building was to be constructed, there should be room for expansion, the town must set aside money for maintenance, and the library would be free to patrons.

Especially after 1908, Carnegie imposed guidelines for the interior design and rejected plans that did not meet his company's general philosophy of libraries.

John Calvin Stevens, a Portland architect whose firm designed the Carnegie libraries in Houlton and Rumford, left notes in his copy of a book of library designs that was distributed to communities seeking grants. It was compiled in 1907 with images of existing Carnegie buildings along with floor plans. 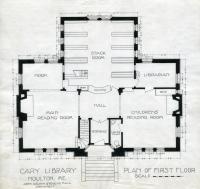 Stevens noted about the Kaukauna, Wisconsin, building, "A good type for exterior but this building not a particularly excellent example." Commenting on the floor plan for Marshalltown, Iowa, Stevens wrote, "A good plan with central control, and the future of the stack room provided for in a small measure. Cost about $18000.00. Exterior shown on Plate 93 is no good."

Carnegie funded two academic libraries as well. The Good Will Home in Fairfield received $15,000 and the University of Maine at Orono received $55,000, both in 1905.

All of the Maine Carnegie libraries are still standing, and all but two – Freeport and the University of Maine – are still libraries, although most have additions that have increased the space and modernized the facilities.

Carnegie was not the only person interested in libraries. With efforts at reform in the late nineteenth and early twentieth centuries came mandatory public education, along with efforts to help immigrants and urban residents who suffered with low wages and crowded and unsanitary living conditions.

Free libraries were one method of helping immigrants and others learn about America, about issues important to a democracy, and as Carnegie articulated, how to achieve success.

Numerous Maine communities built libraries without the help of Carnegie; many relied on grants or endowments from other philanthropically minded citizens.

In at least one case, one of those citizens came forth after Carnegie's organization announced plans for a library. William J. Curtis, a New York lawyer who grew up in Brunswick and went to Bowdoin College, saw an item in a New York paper listing Brunswick as one of the towns to receive a library grant.

Brunswick already had a subscription library, formed in 1883, but no building of its own. The library sought Carnegie funding in 1902.

Curtis wrote to Carnegie, telling him that he wanted to donate toward a library in Brunswick in memory of his father, Captain John Curtis. Carnegie withdrew his grant and Curtis gave $15,000 and land for the library, which opened its doors in 1904.