Maine Memory Network
> Capturing Arts and Artists in the 1930s

Capturing Arts and Artists in the 1930s 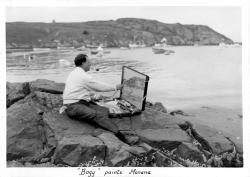 Talk of the 1930s evokes images of food lines, unemployed people looking for work, belt tightening, government programs, and other economic hardship associated with the Great Depression. While Maine and Mainers experienced a number of economic hardships, that fact does not tell the whole story of Maine in the 1930s.

Another, perhaps surprising, story is the strength and vitality of the arts and artists in Maine during that decade.

In Ogunquit, Charles Woodbury and Robert Laurent both operated art schools and the community teemed with artists and galleries. In Kennebunkport, writer and historian Kenneth Roberts built a new home, Rocky Pasture, in 1937 with proceeds from his book Northwest Passage, and continued to write from that location.

Booth Tarkington, who had won two Pulitzer Prizes, dictated his works at his home, Seawood, near Roberts' home. Tarkington lived in Maine half the year. Gladys Hasty Carroll of South Berwick published her best-known novel, As the Earth Turns, about farm life in Maine, in 1933.

On Monhegan Island, Abraham Bogdanov and numerous others painted during the summer months as artists had since the middle of the nineteenth century. In Surry, a drama school and theater opened in 1929 and continued until 1938, when it took a break for the duration of World War II. In Southport, Lucius Hitchcock worked at his summer home drawing illustrations for books and magazines.

These particular Depression-era arts activities in Maine are chronicled in newspaper articles and accompanying photographs – arts contributions in themselves – by Emmie Bailey Whitney, editor of the Lewiston Journal Saturday Magazine, and her husband, G. Herbert Whitney, inside repairman for New England Telephone and Telegraph in Lewiston, and an accomplished amateur photographer.

Between 1933 and 1940, the Whitneys visited a number of artists, writers and others connected to the arts in Maine. The stories and photos celebrated both the artists and the inspiration of Maine in their works and left a record of the 1930s version of Maine's "creative economy."

Emmie Whitney's 1935 Lewiston Journal article about Abraham Bogdanove began, "Monhegan has inspired some of the finest marines that have been painted in the eastern section of the United States, and among their painters – artists who have come year after year and had their summer studios on this 'farthest east' island of the Maine coast – none stand higher in the art world than Bogdanove."

The celebration of Maine and of art did not always ignore the economic hardships of the 1930s. Whitney also wrote, "Mr. Bogdanove has never consented to commercialize his art. When the depression and adverse economic conditions have made customers for his paintings scarce, he has preferred to live unpretentiously on the income from his teaching and lectures."

G. Herbert Whitney's photographs and Emmie Bailey Whitney's articles are reminders of the persistence of the inspiration of Maine to artists, writers and musicians and of the effects of these artists on Maine and beyond -- in addition to illuminating the creative aspects of Maine during the Great Depression.