Banners provide some of the most colorful local examples of early decorative art in Maine. After the Revolution, nearly every town between the Piscataqua and the St. Croix rivers fielded a militia unit whose flag became a point of pride. 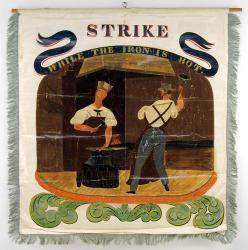 Prior to statehood, the banner trade in Maine seems to have been virtually sewn up by painters from Massachusetts. A new era began in 1822 with the arrival in Portland of Charles Codman (ca. 1800-1842). thereafter, although Codman gradually moved into the field of landscape painting, he and other local painters received most of the commissions for fancy work.

Printer Arthur Shirley and bookbinder Samuel H. Colesworthy, who painted the printers' banner, were talented amateur painters. Shirley was a founding member of the Mechanic Association and Colesworthy just joined when they collaborated on the banner.

Professional painter Joseph E. Hodgkins, who painted the blacksmiths' banner, first appeared in the 1837 Portland directory as a "chaise painter" and was then listed as a "carriage painter and manufacturer" through 1856. He joined the Mechanic Association in 1841.

William Capen Jr., who painted 15 of the banners, is listed in the first Portland directory in 1823 as a "chair maker" at the head of Titcomb's Wharf, and it is for painted chairs that he is best known. He joined the Mechanic Association in 1826 and the next year issued the following notice: 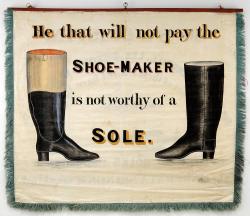 Paints & Painting
The Subscriber informs his friends and the public that he has relinquished one branch of his business (Chair Making) and intends to devote his whole attention to Painting, in its various branches. Mixed Paint, of all colours Oil, Copal Varnish Japan Spts. turpentine, &c. &c. constantly for Sale, at any hour of the day. Old Chair Painted as usual. On hand a small assortment of Chairs, at a very reduced price, likewise a few Carriages for Children.

By the 1830s Capen had become one of the best-known sign and banner painters in town with a shop on Exchange Street. He was in partnership with John Carr Jr., probably from about 1835 to 1851. From 1851 to 1856, the directories list Capen as an "inspector of customs," after which he is again designated as a painter.

Mr. William Capen, long known as a sign painter in this city, died on Sunday last in the sixty second year of his age. For many years Mr. Capen has been deprived of the use of his legs by the disease known as painter's colic.

In subsequent years, Capen's reputation faded along with the memory of the early importance of the Mechanic Association.

William David Barry is a writer and researcher and works as reference assistant at the Brown Research Library at Maine Historical Society. Earle G. Shettleworth Jr. is the Maine State Historian and Director of the Maine Historic Preservation Commission. A version of this article was first published in The Magazine Antiques in September 1984.