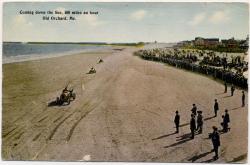 In the early 20th Century auto racing was a novelty, attracting crowds of fascinated spectators, many of whom could hardly afford one of the new machines. Carmakers and dealers soon began to enter factory cars and professional drivers in local races, hoping to win events, enhance their cars’ prestige, and attract potential customers.

In rural areas, auto races and exhibitions were first held at local harness racing tracks, and sometimes along roads or beaches that could be closed to traffic. Hill climbing events were very popular, as it was then considered an important test for early touring cars. Beach racing came into vogue up and down the Atlantic coast wherever long, flat straight-aways exposed by receding tides allowed for unobstructed speed racing.

In 1911, some of the first organized auto races were held in Maine. In June, the Maine Automobile Association and Hiram Ricker & Sons of Poland Spring organized a major hill-climbing event on Thurlow Hill (now known as Range Hill Road) in South Poland. September ushered in the first speed races at Old Orchard Beach, sanctioned by the American Automobile Association. Drivers and cars came from all over New England to compete for prizes and honors at these events.

Within a few short years, however, races on open roads and beaches in Maine were a thing of the past. Poor road conditions and lack of crowd control created many safety issues for drivers and spectators alike. Perhaps more telling was the inability of race promoters to close off and charge admission to events held on public roads and beaches. Soon auto races would only be held within the confines of racetracks in Maine and across the country.

James Merrick is the archivist of the Stanley Museum and the author of two recent books on early racing history published by the Museum: "We will try this hill": the climb to the clouds, 1904-1905 (2004) and Bravo, Stanley!: the racing history of Stanley and the 1906 Stanley land speed record (2006).