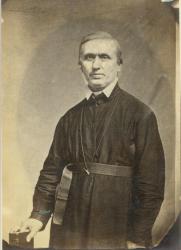 During his lifetime (1815-1887), Jesuit priest John Bapst encouraged countless numbers to follow the Catholic doctrines and, in doing so, often sacrificed his own safety and comfort.

Although a dedicated cleric and accomplished scholar, he became more well-known for an incident that occurred in 1854 when, partly in response to his efforts to build a Catholic school in Ellsworth, he was tarred and feathered by Know-Nothing agitators.

Historian Richard Judd described the incident as "a particularly vicious form of anti-Catholic nativism, which was rampant throughout the eastern United States in the early 1850s," The attack by the Know-Nothings did not stop Father Bapst from continuing his mission in Maine.

After spending over a decade in the state, Father Bapst went on to become the first president of Boston College in Massachusetts, from 1863-1869. He was later appointed Superior of the New York and Canada Missions.

Although sometimes openly criticized for his efforts, Father Bapst worked to meet the needs of 19th-century Catholics and to ensure that they were free to practice their faith.

In his later years, Father Bapst’s mind became confused, and, as a result, he often relived the event in Ellsworth. He lived his final days in novitiates until his death in 1887.