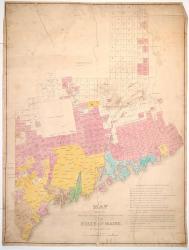 Moses Greenleaf's Map of the inhabited part of the state of Maine, 1829

Native people had occupied the place we now call Maine for centuries before European discovery. During the period of colonial settlement, the region was one of many overlapping national, corporate and private land claims in the North American colonies.

Even after the Revolutionary War, these conflicts influenced Maine's shape, a process that continues today.

Maps provide graphic and vital evidence for this story, revealing some of the dramatic events that have determined the shape of Maine.

This exhibit is based on one in the Maine Historical Society Museum from June to December 2003. That exhibit was sponsored by the Maine Humanities Council and L.L. Bean.