Maine Memory Network
> The Irish on the Docks of Portland

The Irish on the Docks of Portland 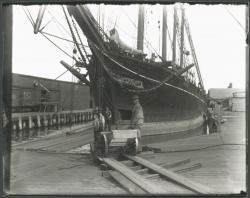 Tens of thousands of dockworkers, formally known as longshoremen, have labored on the wharves of Portland's waterfront for most of the past 150 years.

Many Irish immigrants, largely unskilled workers, got their economic start as longshoremen. These jobs provided the foundation upon which they could build their families' futures in Portland.

The work was difficult, the winter weather often brutal, and the unsteady nature of the labor problematic, thus presenting challenges to both the longshoremen and to their families. But, it also presented them with an opportunity.

Along Portland's waterfront much of the heavy manual labor in the early 19th century was being performed by an important community of Black People who were dockworkers, many living at the base of Munjoy Hill. 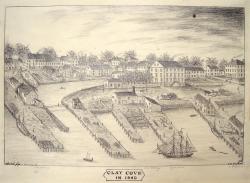 Some of these laborers had come to Portland by following the molasses trade from the West Indies. By importing large quantities of this dark sticky substance, Portland became a notable supplier of refined sugar, especially through the J. B. Brown sugar refinery on the waterfront.

Other by-products of molasses were rum and other forms of alcohol, distilled at the McGlinchy brewery and other legal and semi-legal enterprises throughout the town.

Portland's maritime history, and its commercial prominence, changed dramatically in 1853 when the city was linked by rail to Montreal by the Atlantic and Saint Lawrence (later known as the Grand Trunk) Railway.

This was the dream of John A. Poor who saw the potential of Portland as a major world port connecting, by ocean steamship and rail, the markets of the American continent with the maritime centers of Europe. Poor believed that Portland could eventually rival the major cities of the Baltic. 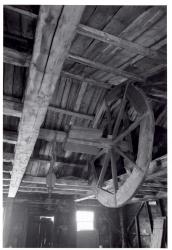 The development of Portland as Canada's main winter port was significant, even though it never quite rose to the level of Poor's vision of greatness. The major commodity handled through the port of Portland was Canadian grain, especially from November through April when the Saint Lawrence River was frozen, effectively making Montreal and Quebec land-locked cities.

Beginning in 1853 large steamships arrived in Portland with increasing regularity during the winter, giving the longshore laborers steady and eventually increasingly more lucrative work. This railroad connection coincided with the arrival of large-scale immigration from Ireland in the years immediately following the devastating potato famine of the late 1840s.

Although many of Maine's early Irish settlers had originated from the north of the country, mainly Scots-Irish Presbyterians from Ulster, the newer famine-era immigrants came largely from the poorer western regions of Ireland. Most post-famine immigrants to Portland came from County Galway, with its strong and surviving Irish language (Gaelic) tradition.

In a process known as "chain migration," one family member arrived and paved the way for others to join, usually by sending "money from America" to help with the cost of passage on steamers.

One place that these new Irish immigrants could find work in Portland was along the waterfront. By the mid-19th century the Irish had already displaced the Black dockworkers. As work became more regular and attractive, at least in the winter months, the Irish dockers attempted to formalize and guarantee their working conditions. By the 1860s an Irish longshore association was demanding higher wages, especially during the boom times around the Civil War.

By 1880, these mostly Irish dock workers incorporated as the Portland Longshoremen's Benevolent Society (PLSBS). Most of the charter members of the PLSBS were Irish and many of these were primarily Irish -- Gaelic -- speakers. One of the bylaws of the PLSBS stated that "No colored man shall be a member of this society." 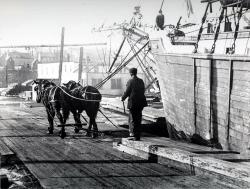 Racism agains Black people was not unique to Portland, but it was ironic given the early history of Black people on its waterfront as well as the fact that the Catholic Bishop of the Diocese of Portland at that time, James Augustine Healy (1875-1900), was half African American and half Irish.

The Irish immigrants congregated in two main neighborhoods and the streets connecting them along Portland’s waterfront: the west end, later known as Gorham's Corner, with its Saint Dominic's parish (the oldest Catholic Church in Portland, dating from 1833); and the east end, better known as Munjoy Hill, with its Cathedral of the Immaculate Conception (1866).

The parochial nature of life in Galway, with regional differences reflecting seemingly small geographic distances, had migrated intact to Portland. Often the children from one of these neighborhoods hardly knew the streets or the residents of the other, even though they were barely one mile apart. 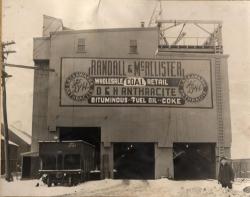 Because so many of Portland's Irish longshoremen had similar Galway surnames, such as Joyce, Connolly, Folan/Foley, O'Malley, or Gorham, a cultural trait common in Ireland, the use of nicknames for those with common family names, survived in Portland.

Most of the longshoremen were Roman Catholic. Every bishop since the Diocese of Portland was first created in 1855 had an identifiably Irish surname, such as Bacon, Healy, O'Connell, Walsh, Murray, McCarthy, Feeney, Gerety, O'Leary, Gerry, and Malone.

By the 19th century there were numerous Irish social, cultural, and political organizations in Portland, including the Portland Longshoremen's Benevolent Society, whose peak membership of 1,366 was recorded in 1919.

By the early 1920s, however, there began a steady decline of work and membership. In the 1920s the Canadian government upgraded the ports of Halifax, Nova Scotia, and Saint John, New Brunswick, to handle "Canadian goods from Canadian ports." Canadian longshoremen in those two ports handled the grain that had been shipped from Portland for the 70 years between 1853 and 1923.

Despite a brief positive revival in maritime cargo due to World War II, Portland's maritime labor continued to decline. Eventually, Portland became known essentially as an oil port, with the Portland Pipeline handling oil shipments to Montreal. Oil was not labor intensive, however, and the longshoremen unsuccessfully searched for commodities to ship from this deep water port, or for imports that could be handled at Portland. 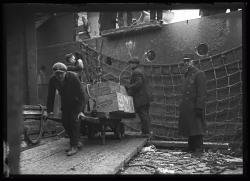 By the start of the 21st century, the port of Portland had largely become a natural resource without a clearly defined function.

Dr. Michael C. Connolly is Professor of History at Saint Joseph's College of Maine and the editor of They Change Their Sky: The Irish in Maine (University of Maine Press, 2004); co-editor of John Ford in Focus: Essays on the Filmmaker's Life and Work (McFarland Publishers, 2008); and author of Seated by the Sea: The Maritime History of Portland, Maine, and Its Irish Longshoremen (University Press of Florida, 2010).

Roy Caleb, who lived on Munjoy Hill, worked longshore for 50 years. He was among the non-Irish dock workers in Portland.

Concannon was born in Derryloughane East, County Galway, Ireland, and worked longshore as a young man.

Malone, born in Rosaveal, County Galway, Ireland, was known as one of the best Irish story-tellers.

Phil O'Donnell, the "Iron Colt," worked on the Portland docks for 50 years.

Tom "Midnight" Mulkern worked longshore in Portland from 1926 to 1981 and loved to reminisce about longshore work and the old Irish neighborhoods.

A native of Inverin, County Galway, Ireland, O'Malley served in the Irish Republican Army before coming to Portland.

Welch was born in Portland, but both of his parents came from Ireland. He worked longshore as a young man.