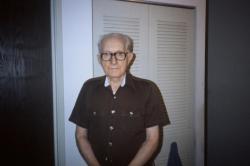 He served in the Irish Republican Army until the early 1920s, before he came to the U.S.

In 1926, he joined the Portland Longshoremen's Benevolent Society.

A fluent Irish speaker, he married Mary Connolly from Half Mace (Carna).

O'Malley said, "I was from twelve miles from Galway. They called them Cois Fharraige, all the way back to Clifden. That means 'by the sea' in Irish. That was on the map of Ireland."

When asked to describe his old neighborhood off Danforth Street, O'Malley responded: "Christ, there was nothing but Irish down there [tyng and tate streets] at one time."

Bemoaning the fact that there was often not enough work for all the longshoremen, he said, "Sometimes you'd go down there for nothing – Monday through Friday watching the tide go…"