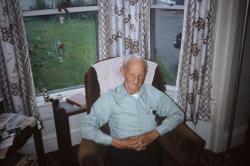 He lived on Waterville Street on Munjoy Hill. Caleb was of Scottish and English heritage, but was a keen observer of Irish Customs.

Asked about the waterfront, Caleb said, "I know why the place went dead. When the Canadian National [railroad] left here and the Grand Trunk folded up and went back to Canada - that killed the port.

"They could make a better day's pay down there on that waterfront than they could anywhere else, because it was organized way back in the late 1800s… I think the waterfront longshore was the strongest union in the city of Portland."

Asked about different treatment for those born in America (native borns), Caleb replied: "If you were a native born, even if your people were from Galway, boy when you'd get home at night you'd be dead, 'cause they'd put it to you. They didn't say much, but they'd put it right to them."