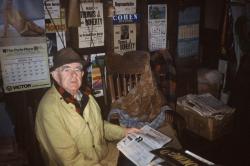 O'Donnell was known locally as the "Harbormaster," a job he held for many years. His nickname was "The Iron Colt." His father was known as "The Iron Horse."

He operated "Driftland", his get-away on the corner of Munjoy and Wilson streets.

When asked how many men worked longshore in the late 1920s, O'Donnell said, "There would be 1,200, sure. It would look like Holy Name Sunday up at the Saint Dominic's! O, Jeepers, the place would be packed."

He recalled, "The Grand Trunk had eight piers. They would have these signs written in Irish and Italian. We couldn’t even read the Irish. They said, 'No Smoking.'"

Of hiring practices, O’Donnell said, "There was a shape-up at the head of each wharf. They would give union men time to get from one wharf to another. Everyone got along with each other."