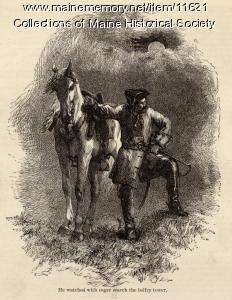 The period of American history just prior to the Civil War required a mythology that would celebrate the strength of the individual, while fostering a sense of Nationalism. Longfellow saw Nationalism as a driving force, particularly important during this period and set out in his poem, "Paul Revere's Ride" to arm the people with the necessary ideology to face the oncoming hardships. "Paul Revere's Ride" was perfectly suited for such an age and is responsible for embedding in the American consciousness a sense of the cultural identity that was born during this defining period in American History.

It is Longfellow's interpretation and not the actual event that became what Dana Gioia terms "a timeless emblem of American courage and independence."

Gioia credits the poem's perseverance to the ease of the poem's presentation and subject matter. "Paul Revere's Ride" takes a complicated historical incident embedded in the politics of Revolutionary America and retells it with narrative clarity, emotional power, and masterful pacing,"(2).

Although there have been several movements to debunk "Paul Revere's Ride," due to its lack of historical accuracy, the poem has remained very much alive in our national consciousness. Warren Harding, president during the fashionable reign of debunk criticism, perhaps said it best when he remarked, "An iconoclastic American said there never was a ride by Paul Revere. Somebody made the ride, and stirred the minutemen in the colonies to fight the battle of Lexington, which was the beginning of independence in the new Republic of America. I love the story of Paul Revere, whether he rode or not" (Fischer 337). Thus, "despite every well-intentioned effort to correct it historically, Revere's story is for all practical purposes the one Longfellow created for him," (Calhoun 261). It was what Paul Revere's Ride came to symbolize that was important, not the actual details of the ride itself.