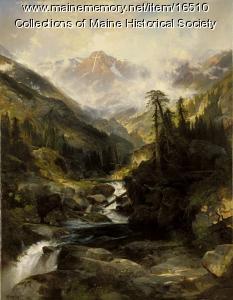 Mountain of the Holy Cross painting, 1875

Traditionally the Petrarchan sonnet as used by Francesco Petrarch was a 14 line lyric poem using a pattern of hendecasyllables and a strict end-line rhyme scheme; the first twelve lines followed one pattern and the last two lines another. The last two lines were the "volta" or "turn" in the poem. When the sonnet came to the United States sometime after 1775, through the work of Colonel David Humphreys, Longfellow was one of the first to write widely in this form which he adapted to suit his tone. Since 1900 poets have modified and experimented with the traditional traits of the sonnet form.