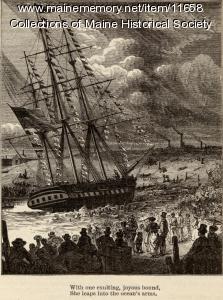 Illustration, The Building of the Ship, ca. 1880

Preparation Required/Preliminary Discussion:
Lesson plans should be done in the context of a course of study on American literature and/or history from the Revolution to the Civil War.

The ship of state is an ancient metaphor in the western world, especially among seafaring people, but this figure of speech assumed a more widespread and literal significance in the English colonies of the New World. From the middle of the 17th century, after all, until revolution broke out in 1775, the dominant system of governance in the colonies was the Navigation Acts. The primary responsibility of colonial governors, according to both Parliament and the Crown, was the enforcement of the laws of trade, and the governors themselves appointed naval officers to ensure that the various provisions and regulations of the Navigation Acts were executed. England, in other words, governed her American colonies as if they were merchant ships.

This metaphorical conception of the colonies as a naval enterprise not only survived the Revolution but also took on a deeper relevance following the construction of the Union. The United States of America had now become the ship of state, launched on July 4th 1776 and dedicated to the radical proposition that all men are created equal and endowed with certain unalienable rights. This proposition is examined and tested in any number of ways during the decades between the Revolution and the Civil War. Novelists and poets, as well as politicians and statesmen, questioned its viability: Whither goes the ship of state? Is there a safe harbor somewhere up ahead or is the vessel doomed to ruin and wreckage? Is she well built and sturdy or is there some essential flaw in her structural frame?