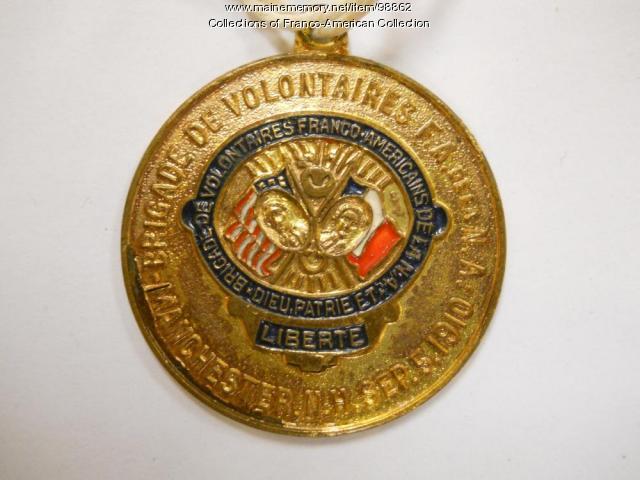 The medal features the insignia of the Brigade - cameos of George Washington and the Marquis de Lafayette atop the flags of the United States and the French Republic. The central roundel is encircled by the words "BRIGADE DE VOLONTAIRES FRANCO-AMERICAINS DE LA N[OUVELLE] A[NGLETERRE]" and the group's motto, "DIEU, PATRIE ET LIBERTE" (French: "God, Country and Liberty"). The outer edge of the medal reads: "BRIGADE DE VOLONTAIRES F[RANCO] A[MERICAINS] DE LA N[OUVELLE] A[NGLETERRE] MANCHESTER N. H. SEP 5 1910." The reverse is blank, except for the maker's mark - "Whitefield & Hoag Co., Newark, NJ."

The Brigade was organized by the Union St Jean-Baptiste of Woonsocket, RI and drew together dozens of Franco-American military societies from across New England. Annual conventions and "encampments" were held across New England, during which the various groups were organized into regiments and conducted drills and paraded. The Brigade and the societies which formed it were important examples of Franco-American pride in their unique identity and, at the same time, patriotism to their adopted country.

On the U.S. entry into the First World War in 1917, the Brigade volunteered its members for enlistment in the U.S. army, but authorities refused to allow the entire brigade to serve with its command structure intact. Instead, individual members of the societies often enlisted, and most of the groups which made up the brigade disbanded after the War and in the subsequent decades.

The only known Maine group which was part of the Brigade was the Fusiliers Laurier (Laurier Rifles) of Biddeford, and this item is thought to have belonged to a member of that group.