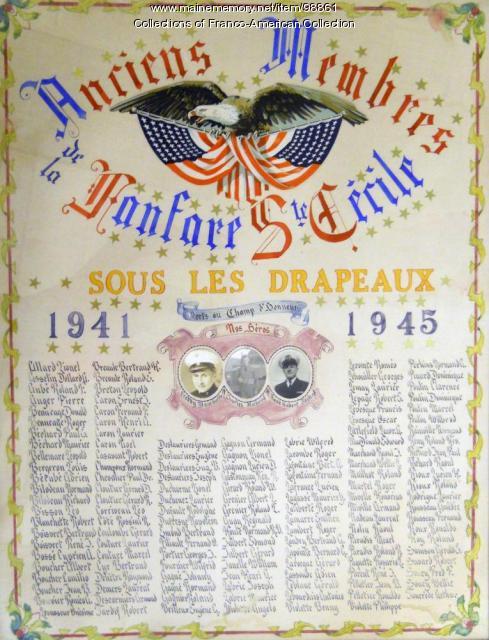 A list of former members of the Fanfare Ste Cécile (the St Cecile's Boys' Band) of Lewiston who served in the Second World War. The title reads "Anciens Membres de la Fanfare Ste Cécile Sous Les Drapeaux 1941 – 1945." "Sous Les Drapeaux" is a French expression which literally translates to "under the flags," and which is usually used to mean "in the armed services." Here, however, the expression takes on an additional nuance, since nearly all the names on the roll of honor are of French-Canadian origin.

This item represents a turning point in the history of Maine's Franco-American population and presents two concurrent identities held by Franco-Americans. On the one hand, the Fanfare Ste Cécile was a thoroughly French organization, from the name right down to its membership. That the author of the roll of honor has taken great care to reproduce the correct accent marks on each of the names is indicative of this. The text is entirely in French, and only a handful of names commemorated are not of French origin.

On the other hand, the imagery is fervently patriotic and American, particularly the bald eagle clutching the Stars and Stripes. The creator is clearly making a statement that these Franco-Americans were proud Americans, regardless of their ethnic origins. In this period, Franco-Americans in many ways still needed to prove their loyalty to their new country.

The Second World War would be a turning point for the Franco-American community in Maine. The generation that fought in that conflict was the first to be raised under Maine's "Americanizing" legislation, including the requirement that all children converse only in English in public schools. The War helped foster this sense of patriotism and identity as an American - until this point it had been commonplace for Franco-Americans to refer to Canada as "home", regardless of their actual country of birth.

The Fanfare Ste. Cécile was one of a number of Franco-American musical groups in Lewiston. It was founded in 1897 by the Dominican Lay Brother Aymon under the auspices of L’Association St Dominique - an organization sponsored by the local parish to provide "wholesome" entertainment for boys and young men. As a boys band, members were accepted from the age of seven. The band produced many accomplished musicians who went on to perform locally with the adult band, the Fanfare St. Dominique, as well as pursuing professional music careers. In 1947, partly due to declining membership engendered by the war, both the Fanfare St. Dominique and the Fanfare Ste. Cecile merged with the Montagnard Band of Lewiston.

The item includes three photographs of men who were killed in action - Freddy Blanchette, Charles Michaud and René Hubert Bédard. See transcription for the full roster of names.