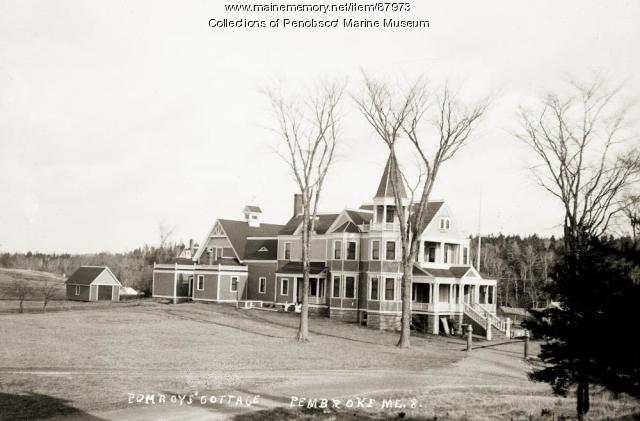 As a young man, Thomas W. Pomeroy (also Pomroy) (1832 -1926) of Pembroke practiced the mason’s trade but soon left for New York where he called himself a "clairvoyant physician."

His method of diagnosis was to assume a trancelike state in which he would ascertain the patient’s illness and prescribe an herbal treatment while holding an artifact, such as a lock of hair, from the patient.

His amanuensis, usually his wife or his niece, recorded his utterances, which he claimed he could not recall after coming out of the trance. He developed a large following in New York, and also traveled widely in Europe and Canada, acquiring many devoted patients.

New York authorities charged Pomeroy in 1887 with practicing medicine without a license (or any academic training). He apparently negotiated a settlement agreement: records show he graduated in 1889 from the Eclectic Medical College of the City of New York, was licensed as a medical doctor in Connecticut in 1893. He was still practicing in New York on March 31, 1915, when he was almost 83 years old.

That Pomeroy became a wealthy man may be inferred from the mansion, always known as "Pomeroy Cottage," he built in Pembroke as a summer home in 1897-98.

As reported in the Eastport Sentinel of August 11, 1897, he had engaged as builder "Mr. Nathan Foster who built the handsome residence of John D. Allan, Esq., at Dennysville and our Odd Fellows Hall last year, and is soon to commence upon a house for Mr. Frank Watts. The house is to be constructed of the best materials obtainable and in the usual thorough manner which characterizes Mr. Foster’s work."

Several sources, including Carl K. Hersey’s 1982 "A History of Pembroke, Maine" (in the sesquicentennial souvenir book) report that the cost of construction was $80,000. It was built on a hill overlooking the Pennamaquon River and the Ironworks where Pomeroy had labored as a boy.