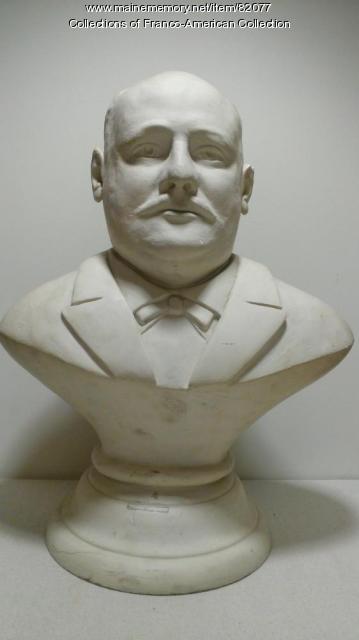 This bust was made of Louis J. Martel after his death by Robert Wiseman, then a medical student, who would go on to become Lewiston's first Franco-American mayor, in 1914.

Born in Ste-Hyacinth Quebec, Martel (1850-1899) came to Lewiston in 1873 to practice medicine in the new immigrant community there at the invitation of Father Hervey, the local priest. By 1879 Martel had become a US citizen and encouraged his fellow immigrants to do the same. Martel was sometimes called “the Father of Naturalization" as he was known to do things such as provide financial support to immigrants and organize naturalization classes.

Martel served in the Maine Legislature in 1884, was a city alderman from 1890 to 1892, and was the first Franco-American to run for mayor of the city in 1893, but lost the election narrowly.

Martel founded, or helped to found a number of Franco-American institutions in Lewiston - Le Messager, the French newspaper, St Mary’s Hospital, l’Institut Jacques Cartier, Le Club Musical Literaire and others. However, his generosity and lack of business acumen led him to die penniless. The Martel School in Lewiston was named after him in 1925.