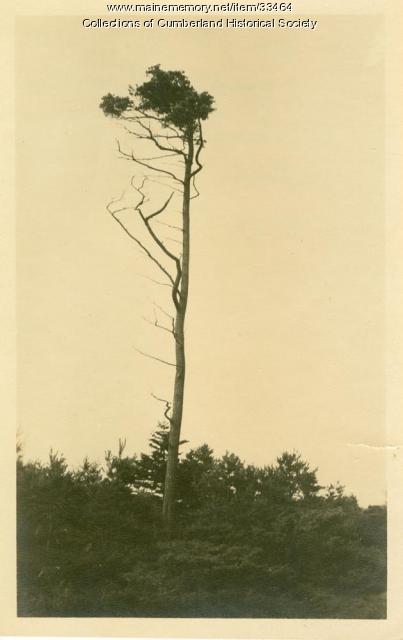 On the hill locally known as "Ephraim's Mount" (behind the home of Captain Ephriam Sturdivant) there were twelve tall pine trees, called "The Apostles." These were used as a sighting or landmark for sailors bringing ships into Portland Harbor. This last tree fell in 1935.

Captain Ephriam Sturdivant was born in what was then the Town of North Yarmouth on Feb. 14, 1772. He went to sea at the age of 12 and before he reached age 21, he was in command of a vessel. He owned vessels and sailed them, trading with the West Indies and Europe.

In 1810 he imported a cargo of Merino sheep from Portugal which he pastured on Sturdivant Island. He owned that island which is sometimes called Clapboard Island today, and lies just off the Cumberland Foreside shore. A letter marque was issued to his vessel the Reaper June 18, 1812 by President James Madison giving him permission to operate that vessel as a privateer. Reaper was a schooner of 206 tons and was armed with 6 carriage guns and 75 men. William Hutchinson Rowe in his book " Ancient North Yarmouth and Yarmouth" also places Captain Sturdivant in command of another ship operating as a privateer, the Ilsley, a ship of 143 tons, 6 guns, and 75 men.

After surviving the War of 1812, he went on to do many other things important to the area, including naming the Town of Cumberland after it separated from the Town of North Yarmouth. He was granted that privilege by a vote of Town Meeting. He also represented the town in the state legislature, and served as a state senator. He served as a Cumberland Selectman for many years, and in conjunction with Judge Preble he bought the right of way for the Grand Trunk Railroad in the Cumberland area. He was also a member of the first convention which framed the Constitution of Maine in 1820.