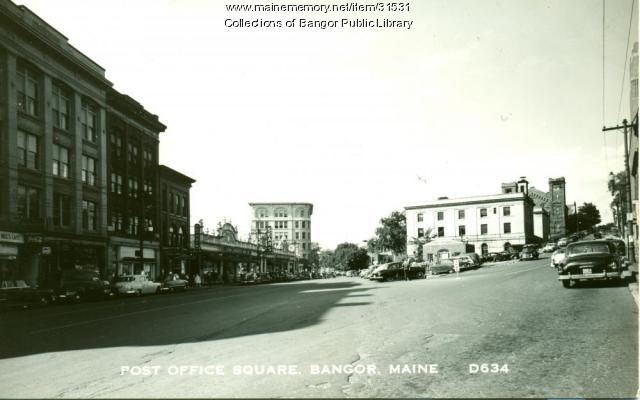 This record was added to Maine Memory Network through the efforts of a student at James F. Doughty School.

The Post Office was built after the fire of 1911. Center Street Hill (right), was originally called “post office hill”, and the locals called it Baptist Hill because the First Baptist Church, which was destroyed in the 1911 fire was there. In 1914 the U.S. Congress voted to buy the site and build what is now known as Bangor City Hall. It was originally known as the Federal Building which housed Federal Offices as well as the Post Office. This was the area where a bandstand once stood where many concerts were held and famous people would deliver speeches. (73 Harlow)

The Tourist Information Center was located near the Post office building. This is the center where people would go for information on sights to see and places to go. This is what we would know now as a concierge.

The Sears Roebuck transaction was signed in June 1933 and was planned to be ready by September. The Sears store was constructed of multiple buildings, Mr. Norris, owner of the 2 buildings, stated, “the merchandising firm would occupy the greater part of the Post Office square building where six large stores will be built into one, containing basement counter and shopping facilities, and two floors of the Morse building.” The Bangor Sears-Roebuck stores were said to be the largest in New England outside of Boston, and had practically every item known to merchandising.

The Paramount Hotel was located, between 1942 and 1949 in the building formerly occupied by the Wellington Hotel.