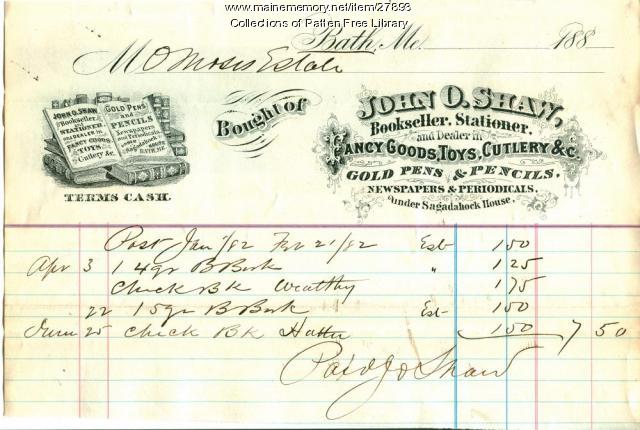 This bill from the stationary store of John O. Shaw shows the diversity of wares offered from one merchant in Bath in 1882. Shaw dealt not only in stationary, but also in books, fancy goods, toys, cutlery, gold pens and pencils, newspapers, and periodicals. This particular bill for Oliver Moses' estate mentions the sale of check books, which is not surprising considering the Moses family's investment in Bath's downtown.

John O. Shaw (1838-1906) was born in Bath, going to sea at the age of sixteen after attending the local schools. He was part of an established Bath family; Shaw's great-great-uncle, Joshua Shaw, owned "Shaw's Point" where the city's downtown was established in the first years of the nineteenth century. Shaw married Mary E. MacLoon in 1864 and they had seven children together. She died just less than seven months after John in 1906.

When the Civil War broke out, Shaw returned home from his maritime employment, enlisted in the Navy, and served as an ensign in the East Gulf under Admiral Bailey. Right after the Civil War, Shaw started his store. By the time of the 1867 directory, Shaw was established "under the Sagadahock House," with much of the same merchandise mentioned on this receipt. The 1867 advertisement also noted that he was the agent for Harper Brothers' publications and sold both school books and yankee notions. The directory published the year before his death in 1906 showed that Shaw remained a bookseller and stationer, but had expanded his inventory to include artists' materials, photographic supplies, phonographs, and Butterick sewing patterns.

Like many of the local businessmen in Bath, Shaw probably found community service was part of daily life and effective business practices. He served as a member of the Common Council and on the Board of Alderman, as well as serving as a Representative to the State Legislature for two terms. Shaw was also elected Mayor of Bath in 1893. The great fire of January 1894 that destroyed the Sagadahock House and neighboring structures greatly damaged Shaw's stock. Initial figures from a "Bath Independent" of February, 1894, listed Shaw's losses at $15,000; only a little more than half was covered by insurance. When the new block went up in the coming months, Shaw returned his business to the Sagadahock Block, to the storefront with the same address as his previous location--74 Front Street.

Several of Shaw's children worked in his business, while another began a bookstore in Brunswick. The business continued under the Shaw family until the death of Frederick P. Shaw, one of John's sons in 1951. As Shaw's Office Supplies, the business continued to be part of Bath's downtown until the first year or so of the twenty-first century, and closed after some 136 years.