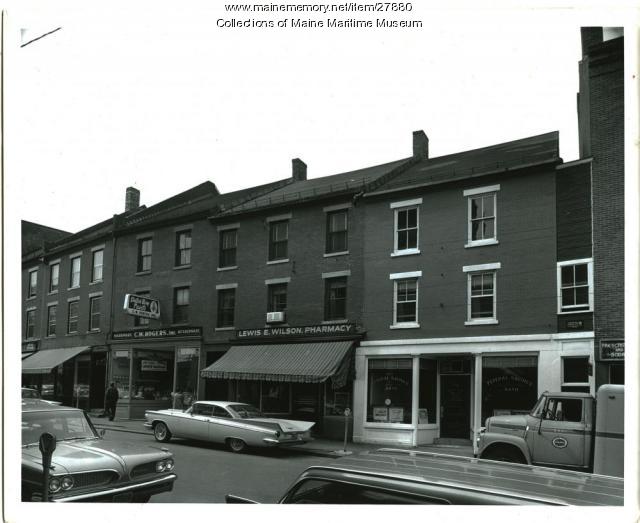 This black-and-white photograph by Herbert L. Douglas of the west side of Front Street shows several of the stores at the heart of Merchants' Row in the 1950s. At the center of photograph is the drugstore of Lewis E. Wilson. This building has served as a stable location for just a few businesses. Built shortly after the fire of 1837, the first documented tenant of the building was Levi P. Lemont, a Bath native who ran a clothing store with his son Charles.

In 1850, ads in the newspaper "Eastern Times" demonstrated that Lemont had provided his store with a number -- 47 Front Street, although standardized numbering in the city was decades away and would eventually renumber the space as 114. Above the store at 45 Front street was the daguerrotype studio of B. F. Upton, in the early 1850s.

The Lemonts remained there until 1878 when the grocery store of Michael Farley Gannett took over. This business was also continued by a son, Edwin Farley Gannett, but ended with Edwin's death in a traffic accident in 1903. After a few years, a drugstore moved into the storefront in 1914. Lewis Wilson acquired the business in 1919, and it remains Wilson Drugstore at the time of this writing (2009).

Most of these men were important to Bath history in other ways. Levi Lemont (1801-1890) was married to the younger sister, Mary Wakefield Snow, of the wife of his business neighbor, Davis Hatch. According to Henry W. Owen's history of the city, Lemont was reportedly the first Inspector of Police and City Marshall in Bath, helped organize Bath Savings Institution in 1852, and was part of the group that formed the Sagadahoc Historical Society in 1877. Owen also relied on Lemont, who wrote one of the first histories of Bath, albeit one that Owen found reason to correct occasionally.

Michael Farley Gannett (1802-1889) was a Bath resident, off and on, from 1818. He began a business here in 1826. His grocery business was already well established when he moved it to 114 Front Street. Gannett had three wives. One of his sons, Henry Gannett (1846-1914), was schooled locally, but went on to much broader horizons. Deeply involved with U.S. Geographical Survey, Henry's Washington D. C. obituary labeled him the "father of American mapmaking." In 1888 he was one of the founding members of the National Geographic Society.