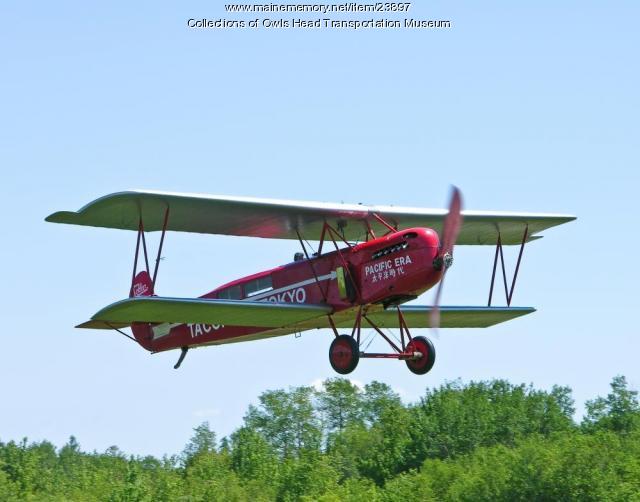 Originally configured as a two cockpit observation plane, the 1923 Fokker C.IVa has experienced a number of modifications over its long lifetime.

The rear cockpit was reinstalled and the passengers’ seats were replaced with a 450 gallon fuel tank. Pilot Bob Wark and copilot Eddie Brown planned to make five stops to refuel: Whitehorse, Yukon; Nome and then Fairbanks, Alaska; Petropavlovsk, Russia and finally Tokyo, a journey of some 5,400 miles. The reality was somewhat less impressive: fewer than 200 miles into the journey, the daring duo suffered a fuel-transfer problem, causing the engine to quit and forcing a landing in a small field in Lulu Island, near Vancouver, B.C. While Wark was able to land safely, the ship was carrying so much fuel that he was unable to takeoff to resume the journey. After dumping the majority of the fuel, and sending copilot Brown ahead in an automobile, Wark managed to safely take off from the field. His target was Ladner Field in Vancouver, mere minutes away. Upon arrival, however, Wark overshot the runway, shearing the landing gear off the plane. The wings were removed and the airframe hoisted onto the flatbed of a Ford AA truck and driven back to Washington State.

In 1932, the plane was sold to L.R. Nelson, of Ephrata, Washington for the grand sum of $1 and other considerations. It then sat in a field, its engine having been removed and stored in a nearby barn. A victim to the elements, the airframe suffered a fire at one point, stripping it down to the metal tubular frame. Flash forward to the early 1970s, when Ken Cianchette, a founding trustee at the Owls Head Transportation Museum, discovered the wreck and set about restoring it to flying condition. In 1992, with the restoration nearly complete, Cianchette donated the plane to the Museum. In 1999, with the restoration finally complete, Cianchette made the first flight of the C.IV in 69 years. Following this historic event, he turned the keys over to the Museum for the final time, having seen the nearly 30-year project come to fruition at last.