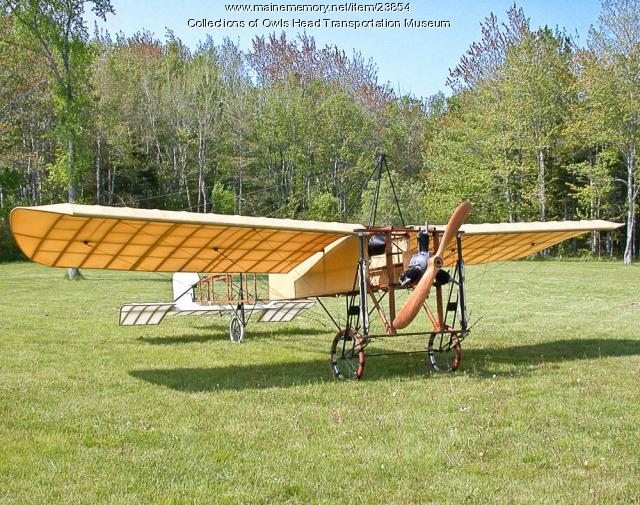 In 1909 Bleriot, in a Type XI, became the first to fly across the English Channel, flying from Calais, France to Dover, England on July 25th. Both a designer and a pilot, pioneer French aviator Bleriot was still on crutches from a previous crash when he made this flight of 21 miles in 38 minutes- through fog and mist, without a compass.

This airplane was powered by an Anzani engine, similar to that on the Bellanca. Anzanis were known to have problems with overheating, and had Bleriot not flown through a passing rain shower, thus cooling his engine, he might not have completed his historic flight. Like almost all planes of this early era, bank was controlled by warping the wings. In 1913 a Bleriot piloted by Adolphe Pegoud was the first aircraft to be flown in sustained inverted flight. Landing gear consists of simple bicycle wheels and rubber bungee cord shocks.

As to the Representation, a little history follows.
In the Museum's continuing tradition of authenticating its collection, the representation 1909 Bleriot XI is nearing the culmination of its two-year rejuvenation. The story of this Bleriot reproduction begins in 1956 in the California shop of Harry Provolt, who built the aircraft for the movie Lafayette Escadrille. This Bleriot bears serial number 3, leading one to
believe that Provolt undertook production of at least this number. A two place Bleriot built by Provolt now resides in the Collings Foundation collection in Stow, Massachusetts. For flight sequences in the film, number 3 was fitted with a 40 horsepower four cylinder Continental engine. The plane is not believed to have flown since the filming. Following its short
film career the Bleriot found itself a part of one of the world's foremost aircraft collections, that of Andy Anderson in Missouri.

When Anderson's collection was dissolved in 1981, the Owls Head Transportation Museum purchased the Bleriot. In 2002 the Bleriot was cut down and begun on its path to airworthiness once again and completed in 2003.