Mountain of the Holy Cross painting, 1875 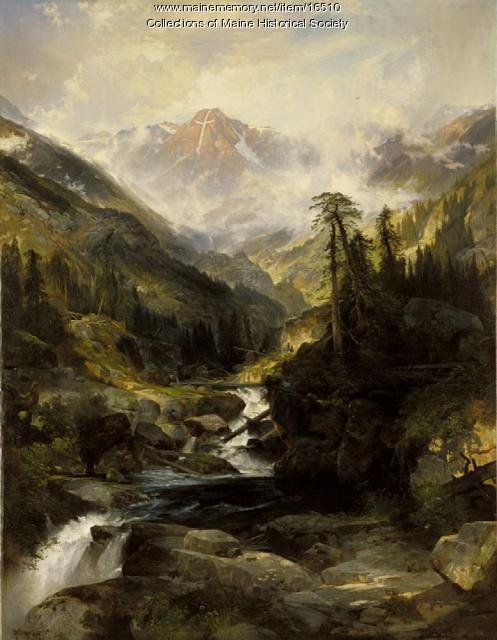 Not available for reproduction or licensing. More info.

Painting by Thomas Moran, MOUNTAIN OF THE HOLY CROSS, 1875.
Few sites embodied romantic mystery and western legend more than did Colorado's Mountain of the Holy Cross. Prior to William Henry Jackson's 1873 photo (created during a government expedition led by Ferdinand Vandeveer Hayden), the mountain was known primarily through folklore that traced its first sightings to Spanish explorers. Popularly believed to have been emblazoned on the mountain by the hand of God, the cross came to be seen as a call to for Americans to renew the Christian morality required to settle the West. Mountain of the Holy Cross was thus seen as a new-world embodiment of the Old Testament site where God was revealed to Moses, and was quickly deemed an "American Sinai." The mountain's role as an emblem of the religious call to Western settlement was enhanced by its position between the crucial 39th and 40th degrees of latitude, a location that Hayden had called public attention to in his annual report to Congress in 1873. Surrounded by mountains and linked with a river system, many saw Colorado Territory (which became a state within a year of Moran's painting) as the spiritual heart of the budding American Empire.

Upon seeing Jackson's photo, Moran traveled to the area the following summer, where he decided to use the waterfall in the foreground to emphasize the monumentality of the scene and bring it more in line with popular conventions regarding the picturesque. With this characteristic use of artistic license, Moran completed the painting in April of 1874 from his Newark studio, and by early June arranged for the picture to go on display at the Corcoran Gallery in Washington.

Perhaps due to its overtly religious message, Mountain of the Holy Cross remained unsold for several years, until it was purchased in 1880 by Dr. William Bell, a founding member of the Denver and Rio Grande Railroad consortium. Moran was market-savvy, and knew when he painted Mountain of the Holy Cross that the natural formation would be interpreted as divine favor for western expansion, a central tenet of Anglo American social and religious thought. Under his ownership, Bell took this symbolism one step further by selling tickets to see the painting to pilgrims visiting his home on their way to the mineral springs of the Rockies.