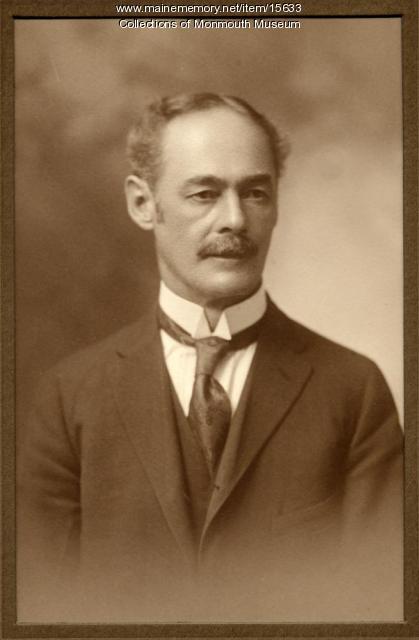 Harry H. Cochrane was born April 6, 1860 in Augusta, the son of Major James Henry Cochrane, of Limington, and Ellen M. Berry, of Belfast.

Harry was reared in the home of his grandparents, Dr. James Cochrane and Eliza McClure, in Monmouth, and attended Monmouth Academy. He was an artist, architect, composer, conductor, musician, singer, writer and poet.

He was the painter, in 1927, of the murals in the Kora Temple building in Lewiston. He was the designer, architect and interior artist of the celebrated Cumston Hall in Monmouth, 1900, and the writer of the two-volume History of Monmouth and Wales, 1894.

"Harry Hayman Cochrane, 86, acclaimed as one of the world's greatest mural decorators and known throughout New England and New York as a gifted musician, architect, composer, and writer as well as artist, died [September 20, 1946, at the Central Maine General Hospital in Lewiston, Maine.]

"Following the genius of his father, he began to draw early in life, and at the age of eighteen began portrait painting. Nine years later he decorated his first church; since then he had decorated over 150 churches and lodge halls, created designs and decorated buildings in all of New England and New York.

"In early life he became proficient in music, led bands and orchestras and even composed instrumental music.

"His wife, the former Ida Gott of Monmouth, was an outstanding woman and an unusual personality, greatly mourned by the artist since her passing. It is said that he had visited her grave almost every day since then. The Cochranes lost their only child, a daughter, Lorena, between 25 and 30 years ago, when she was drowned in a tragic accident at Monhegan, while vacationing. Mrs. Cochrane had been his constant companion, even accompanying him on his tour of Europe.

"Mr. Cochrane was always quiet and unassuming, shunning publicity, and his death will be a great personal loss to everyone who knew him."