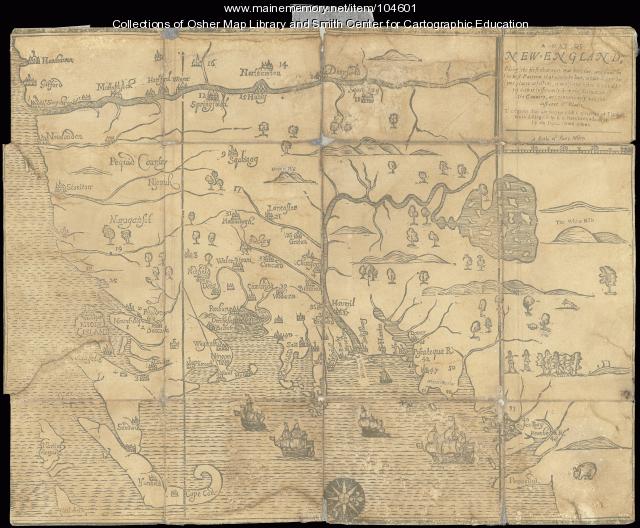 This was the first map to be cut and printed in New England. It was probably designed by William Hubbard to illustrate his account of King Philip's War (1675-76) in "The Present State of New England : Being a narrative of the troubles with the Indians, 1677." The map was printed from a 1677 woodcut by John Foster, who is considered to be North America's first printmaker. The map has a rather primitive appearance and is acknowledged by its maker to be less exact.

Oriented with North to the right, the map's vertical lines marked the northern and southern boundaries of the Massachusetts Bay Colony as set forth in the 1629 charter. Rhode Island was depicted as a small island near the base of Cape Cod (lower left), and Martha's Vineyard was labeled Martins Vineyard. The Connecticut River stretched across the top of the map, while the Merrimack River dominated the center, sprouted from a large, island-studded lake (Winnepesaukee). Situated to the far right (north) were The White Hills of New Hampshire, later rendered as The Wine Hills on a second edition of the map engraved and published in London.

Foster associated the territorial region of New England with a historical region of conflict between the English and the indigenous peoples. Numbers keyed to a table in the text indicated the locations of massacres and raids on the English. The following occurred in was is now known as Maine (lower right): No. 42, Kittery; No. 47, York; No. 50, Saco River; No. 51, Wells; No. 54, Scarborough; No. 55, Falmouth (now Portland).

In the upper right corner is the title: "A Map of New-England, being the first that ever was here cut, and done by the best pattern that could be had, which being in some places defective, it made the other less exact yet doth it sufficiently shew the scituation of the Country, and conveniently well the distance of Places. The figures that are joyned with the Names of Places are to distinguish such as have been assaulted by the Indians from others."