George Walton on the state of the war prisoners to General Lincoln, Georgia, 1779 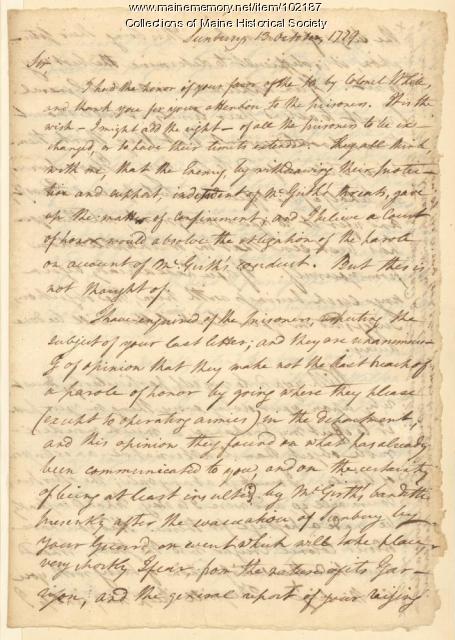 George Walton (1749-1804) was a delegate from Georgia to the Constitutional Convention. A very successful lawyer, Walton was elected to the Georgia Provincial Congress, eventually becoming the president of the Council of Safety. During the war, he served under General Howe and was later commissioned as a colonel. Walton was captured in the Battle of Savannah in 1778 and thrown in Sunbury Prison in Sunbury, Georgia. Upon his release in 1779, he was elected Governor of Georgia and then appointed to the U.S. Senate in 1795, following a decade of devoting himself to state politics. His political career ended following his role in a duel that resulted in the death of fellow Georgia signer Button Gwinnett.

The letter is written to Benjamin Lincoln (1733-1810). Lincoln was a major general throughout the war and the commander of the Southern department of the militia. He led the Siege of Savannah (also known as the Second Battle of Savannah) in 1779. Although the siege failed, it ultimately led to the release of prisoners such as Walton. General Lincoln would ultimately serve as the nation's first Secretary at War.

This letter, written October 12, 1779 in Sunbury, is a thank-you letter to Lincoln for his "attention to the prisoners" during the failed Siege of Savannah. Walton is contemplating the best way to have all of the prisoners freed or exchanged from British captivity.